The Breath of Earth is here!

It has been longer than I planned, but The Breath of Earth, the third book in my Frozen World Antarctic sci-fi series, is finally here! 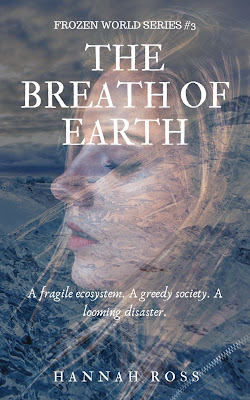 Like all of my books, it's a living example showing that once you want something badly enough, the impossible becomes possible. I have four children aged 10 to 1 at home and a husband who works from home and who, let's face it, thinks taking the time to write is never justified if it clashes with housework - which is kind of always, because I don't think I'll ever reach a point in this life where I have no housework piled up. Furthermore, last January I had taken on an editing job to help pay the bills. If anyone can legitimately say that they have no time to write, it would probably be me. I have no set hours, no private work space, no budget for any extras, and zero support from my family.

What I do have is a brimming well of stories within me, a laptop, and a virtual cheerleading community of indie authors and amazing readers that keeps egging me on. Oh, and an overpowering, burning desire to make money from what I love and do best - writing fiction.

The Last Outpost, the first book in the Frozen World series, was a pivotal point in my writing career in the sense that it was the first book I didn't try to pitch to agents and publishers before going the self pub route. I didn't want a publishing deal even theoretically. What I did want was to have that book out in the world as soon as possible, working on my behalf and, hopefully, earning money. I also wanted a full measure of control over my story and how it would see the light of day. I knew I would make mistakes, I was prepared to do that and bounce back and keep learning.

While I had some ideas about a sequel to The Last Outpost when I released it, I was also prepared for the possibility of the book remaining a standalone. I knew I was tired of writing and publishing books nobody would buy. I no longer bought into the starving underappreciated artist trope. Just like a storyteller of old wouldn't be spinning their tales if nobody came to take a seat next to them beside the fire, I wouldn't keep writing things nobody else was interested in. But I got some very positive reviews for The Last Outpost and, for the first time ever, a trickle of sales that didn't fizzle out after the first few days.

Encouraged, I did two things:

1. Wrote a freebie short prequel, The Frozen Shore, and offered it for free on Smashwords to funnel readers to The Las Outpost. I don't have exact numbers, but I'm pretty sure I gained a few new readers that way.

2. Went full steam ahead with writing the sequel, The Ice Fortress, which took a few months. Once it was released, I was glad to see that the conversion rate from the readers of the first book was pretty good. It means that many readers have enjoyed the first book enough to buy the second, which is thrilling.

I have been holding off on paid promotion until I would have at least three books in the series, but even so, I have had daily sales with the first two Frozen World books - without advertising and initially, with no reviews to speak of. I do have a social media presence (this blog, Facebook, Twitter, Goodreads, and lately Instagram), but it is relatively modest.

My marketing plan for the near future includes making the first book of the series free for a few days, some AMS ads, and most importantly, working on the next book in the Frozen World saga.

So is there more to come? You betcha! I am currently working on an outline and getting pretty excited. Give me a few late-nighters, and it should be well under way.
Posted by Hannah Ross at 02:38 No comments: