Are you a good boss?

Once upon a time, I used to work for a real douchebag. If there were a competition for the title of World's Worst Boss, that stinker would take it. I mean it.

I was fresh out of high school, and this was my first "real" job. It was the post of a secretary which entailed some simple administrative tasks like filing, answering phone calls, and making coffee.

It didn't take me long to figure out that my boss was a crook. I was besieged with phone calls from angry people to whom he owed money. I was instructed to say he's abroad every time. When an important client came for a visit, I was requested to put on a show to make them believe that more people than the three or four of us worked in the office. I was made to "dress-up" empty desks like active work spaces, with landline phones and masses of papers.

This propensity of cheating people was not limited to outsiders. The salary we settled on was ridiculous in proportion to the number of hours I put it, but somehow, at the end of the month the paycheck showed an even lower number, and he "had no idea how it happened".

If that isn't enough, my boss was an arrogant, presumptuous, ill-tempered bully. He drank twenty cups of coffee a day, and was particular about always wanting to drink from the same cup, which I likewise had to wash twenty times a day. He yelled at me when I dared to serve him coffee in a different cup. He yelled at me when I didn't answer the phone fast enough. He didn't have the basic decency to maintain a tidy working space. He was a chain smoker and his ashtray was always overflowing.

To top it off, this disgusting blown-up fart refused to step into the elevator together with the cleaning lady, claiming that "she stinks". He stank himself - like a million week-old stale cigarettes. By the way, the cleaning lady came to ask about her payment again and again, too. He swindled that poor woman who was working for a minimum wage and had a family to feed.

You will be glad to know that I left his office at the end of two months, never to see or hear from this ugly swine again. He had given me a lifelong acute aversion to dishonest crooks who abuse their authority.

While my former boss was a humongous cowpie, however, I sometimes have to stop and wonder if I'm being a much better employer to myself. As a freelancer, and thus my own boss, am I giving myself fair working conditions, a fair wage, and fair prospects? With no one to breathe down our necks, it's easy to loaf on Pinterest... but equally easy to succumb to burnout.

So fellow indie authors, just a reminder: put in the work, but don't burn yourself out. Take that walk. Have that cup of tea. Unplug from social media. Catch the moment when you are just spinning your wheels, and take a break. Cuddle your cat. Do some knitting.

This is a marathon. Be good to yourself to keep your productivity for the long term.
Posted by Hannah Ross at 01:11 No comments:

Email ThisBlogThis!Share to TwitterShare to FacebookShare to Pinterest
Labels: freelancing

The man who would be Moses

The Ethiopian Jews (the Beta Israel) are a living, breathing miracle. It simply doesn't seem natural that a Jewish community could exist for thousands of years in complete isolation from the rest of their brethren, without the support network that every other Jewish community has had, and still adhere to the traditions of their ancestors. They strictly kept the laws of ritual purity as described in Leviticus, and made animal sacrifices, long after these two practices were cast aside by rabbinical Judaism as obsolete without the existence of a Temple. Their religious practice ran along a parallel line, developing its own customs and beautiful liturgy.

If it sounds like I love these people, it's because I do. I can't find a more perfect example of the resilience of the Jewish people, who had preserved their identity despite many generations of hardship, privation and apparent hopelessness, and who remained one nation despite being scattered worldwide for so long. The fascinating cultural mosaic of modern Israel can bear evidence to that.

Fascinated as I am with Ethiopian Israelite history, I had long inner debates on whether I dare to venture into it as an author. The vocal pitch of #ownvoices and #notyourstory demands that the ethnicity of the author should match that of their protagonists, which is ridiculous and limiting to a degree I can hardly describe. Finally, I said, Hang it all! I'm Jewish! If someone is part of my people, their story is, in a way, my story too. Thus Land of the Lost Tribe was born.

I am currently working on another novel set in Ethiopia of over a thousand years ago, but in the meantime, I let my creative bunnies run wild and produced this complementary short story, Mahari, which fast-forwards a few centuries all the way to 1862. At that time, the condition of the Beta Israel was probably at an all-time low. The glory of their independent kingdom, which at one point ruled over extensive regions of Ethiopia, was long past. Contact with the rest of the Jewish world was nonexistent. Oppression, isolation, hopelessness, and missionaries took a heavy toll, and many of the Beta Israel converted to Christianity, much in the same way as the Marranos of Spain.

Abba Mahari, an Ethiopian Jewish monk, was a charismatic religious leader who, in the year 1862, organized and led a desperate but inspiring exodus from Ethiopia in the hopes of reaching Jerusalem. Abba Mahari failed, but his heroic journey helped to keep the dream alive and paved the road to the eventual repatriation of Ethiopian Jews in Israel.

You can download Mahari for free in epub format here, and in PDF here. 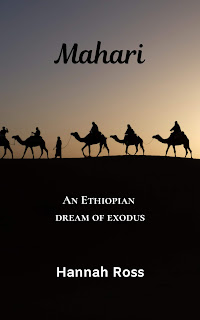 The Blood Heir controversy is a predictable climax to all the #ownvoices, cultural appropriation police and PC culture craze that has been raging in the writing world unrestrained these past couple of years. It's like we can no longer put our fingers to the keyboard without fear of offending someone.

For those who haven't heard of this outrage yet, here's a recap: debut author Amelie Zhao was bullied into pulling her soon-to-be-published fantasy novel because some ARC readers decided it was "racist" and started an online shaming campaign.

I haven't read the book, but I do know this: it's impossible to create when you have to keep walking on eggshells for fear of hurting the feelings of some precious snowflake. It's like some people are just waiting to spot anything related to race/culture and latch upon it, charging with burning torches and screaming "racism! Insensitivity! Cultural appropriation!"

You can't please everyone. It's kind of useless to try.

Here's the deal: belonging to a historically oppressed group doesn't give you a carte blanche to make unreasonable demands of ownership over historical narratives. I'm Jewish; I'm not offended when non-Jewish people write about Jews. I'm a woman; I don't get my feathers all ruffled when male authors write female characters.

Some of my fiction is set in Ethiopia, and I suppose I'm only spared the accusations of cultural appropriation thanks to the fact that my books aren't popular enough to draw fire. I will keep writing whatever the heck I want. I will do my best to be sensitive and thorough in my research, but I won't ask anyone's permission to write. I was drawn to writing for the FREEDOM to create. No one will take this away from me. No one will tell me that a subject is off limits because I belong to the wrong gender/ethnicity.

Another issue is the infamous 'representation' thing. Apparently, you can get a red flag not just for what you write, but for what you fail to include in your book. Newsflash: authors don't owe anyone anything. I refuse to make a character black, white, tall, short, gay, straight, or whatever, to 'represent' a group. I write my characters the way they work with my vision for my particular story. I hate racism and oppression of any kind - and that's why I won't let anyone oppress me as an author.

I have long been saying that this whole PC obsession in literature is blown way out of proportion. We, as authors, should have the freedom to focus on what the readers want - a darn good story - without dodging rotten tomatoes for failing to support militant agendas.
Posted by Hannah Ross at 23:13 No comments: