Guardians of the Gates is here!

Guardians of the Gates, the third and final epic installment in the Quest of the Messenger trilogy, is finally here! Now available on Amazon Kindle: 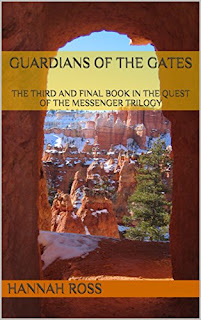 The entire trilogy can be found on my Author Page.
Posted by Hannah Ross at 08:28 No comments:

Email ThisBlogThis!Share to TwitterShare to FacebookShare to Pinterest
Labels: Guardians of the Gates, publishing, Quest of the Messenger

The Greenlanders: A Norse saga of exploration, adventure and faith

I have been fascinated with the characters of Erik the Red and Leif Erikson for almost two decades, and knew I would, someday, write a book about the Norse discovery of America. Then, one day, I discovered that such a book already exists: Meadowland, by Tom Holt.

Bummer, but this happens to many writers. Since no idea, plot or title is absolutely original, you can be pretty sure someone somewhere had used it already. Still, this was a disappointing coincidence (does the world really need two books about the people who had founded the Greenland colony?), but after reading Tom Holt's book, I realized our vision and perspective was so different that I might as well go on with my own.

After a couple of years of writing, rewriting, moving on to other projects and pulling the book out of my virtual attic again, I am finally getting ready to editing it anew and sending it out into the world. In the meantime, I am serializing it on Wattpad.

"Ah, Erik the Red is a brave man," said King Olaf dispassionately. "I think at least half his fault was simply bad luck that made him cross paths with important people. He is not bloodthirsty. He is not even a typical Viking who raids and plunders and murders and rapes at every opportunity. All his energy he put into settling that land he calls Greenland. Anyway, Erik is getting on in years. His son, Leif, will be chieftain of the new settlements. He is the one I summoned here, and he is the one who interests me the most right now."

"He is quite an impressive man, is he not?" said Thorgunna, recalling the tall, powerful, red-haired stranger, a glimpse of whom she caught earlier in the day.
"He is," said the king, "and he possesses an influence which has the potential of growing. Despite the harsh conditions which, as far as I know, make life in Greenland difficult, people continue to go overseas and settle there, looking for profit and especially for freedom. This way, they distance themselves from the Norwegian rule. I had the privilege of entering the covenant of our Savior, Lord Jesus, together with all the royal court," the king placed a hand on his chest and fingered the heavy, ornate gold cross, a jewel he started wearing not that long ago. "I sent priests to all the provinces under my rule, to show the light of the Christian faith to my people. But Erik the Red is a stubborn pagan, and so are most of the people who flock to the shores of Greenland and lose the place that is prepared for their souls in paradise, by the throne of Lord Jesus – and simultaneously their place here in this world by the throne of Norway. It pains me to think of all the souls that are destined to burn in hell, without getting even a chance to hear the Gospel."
Posted by Hannah Ross at 03:39 No comments:

Not long ago I was contacted by an entity who introduced themselves as a publishing company interested in my fantasy series, Quest of the Messenger. At first, of course, I was all thrilled: hurray! My talent is recognized! But then, some red flags ultimately made me reject the offer. In particular:

* The business was very new and run entirely by very young people.
* I could find no information about this "publishing company" anywhere online, except their website.
* The company made all sorts of glorious claims regarding their achievements which, again, couldn't be verified by online search, no matter how extensive.
* I received no personal specific comments regarding my work from the "editors", despite requesting feedback.
* The company founder who communicated with me paid no attention to details; requested materials that had already been sent; alluded to Skype conversations that never took place (I don't use Skype). Overall, I got the impression of sloppy, unprofessional, undiscriminating modus operandi.

I sent them a brief message politely but firmly declining their offer of a publishing contract, and got a long, very defensive, grammatically incorrect email which only confirmed my impression of dodging a bullet. Overall I feel I've had a lucky escape.

It's very easy, especially after pitching your work for a long time and getting many rejects, to be tempted to enter into any contract, with anyone who seems to appreciate you as a writer. However, this can lead to very sad implications. Check out Writers Beware.

Also check out this post by Writer UnBoxed.
Posted by Hannah Ross at 01:05 No comments:

I am happy to announce that Wild Children, my dystopian novel, has found a home with Mason Marshall Press. Planned release is in early 2017. Your Likes and Shares are much appreciated.

"Society's rejects. Unwanted, unloved. Raised in orphanage until age 12 , then taken beyond the boundary and left to fend for themselves, to live or die."