Guardians of the Gates

Thanks to the awesome @crookedaydreamer from Wattpad, Guardians of the Gates, the third and final book in the Quest of the Messenger trilogy, now has a cover - and an amazing cover it is. 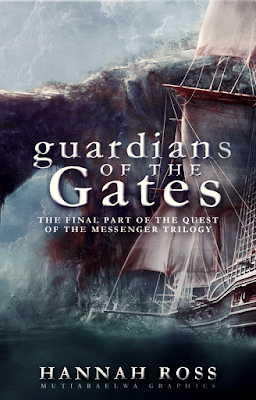 Guardians of the Gates is most definitely my favorite book in the entire QotM saga. Its events take place several generations after Paths of the Shadow and Warriors of the Realm, which makes for a broader perspective. Also, it contains more action, more adventure, more travel - finally taking off from the shores of Tilir - and more cultural variety.

However, I believe the real reason for my partiality lies in the character of Claire Swift - the first and only female main protagonist in the trilogy. There are some strong and important women in the first two books as well, but up until now, the main POV had belonged to a male. Claire's appearance is a refreshing change - not that I like her just because she is a girl. Quite simply, I wish I had a friend and companion like her - brave, honest, loyal, resourceful, ready to undertake any project and very forgiving of other people's idiosyncrasies.

"Perhaps,” said Gahrod, “when they – when we are sold, we can prevail on our new owners to return us to Tilir. Our clans would ransom us... and Claire and Ed too, of course.”

"That is a cheerful thought,” said Jonnar. “I fear, however, that not many people in Kanterra, especially these days, would venture upon a journey to Tilir in order to collect whatever ransom they would be willing to give for us.”

"It wouldn't be a small sum,” argued Gahrod. “Your uncle is Head of the Tionae, and mine of the Kamtesir.”

"Well, if you are so determined to spend the rest of your life in slavery, there is really not much I can do - “

"This is no question of mine being determined. It is about discerning the truth of our circumstances.”

"We must stick together,” Claire interrupted them both. “We must prevail upon this captain to sell us together, and then there will be a higher chance for us to fall into the hands of someone rich and powerful enough to make the journey to Tilir easily. You must swear that the ransom will be very high,” she added, looking from Jonnar to Gahrod.
Posted by Hannah Ross at 13:00 No comments:

Email ThisBlogThis!Share to TwitterShare to FacebookShare to Pinterest
Labels: Guardians of the Gates, Quest of the Messenger, writing

What I'm working on

Right now, my main project is a sequel to Wild Children - I'm still undecided on the title. Here is an excerpt:

Priscilla Dahl must have heard these words a thousand times. She heard them when she was little and they were preparing to go on a visit to her grandparents; she heard them when she was a little older, and running late to a dancing lesson or piano practice. She heard them every time the family needed to present its sleek, perfectly groomed face to the photographers – and she was not surprised to hear them now, on the night of her sister’s debut ball. The whole thing, in her opinion, was a lot more fuss than it was worth. Her mother and Stephanie hardly talked of anything else the past fortnight.

“Prissy?” her mother tapped on the door again – a little refined tap-tap with perfectly manicured fingernails.

Feeling annoyed, she opened the door a crack. “I’m nearly ready, alright?” she said. “And besides, there’s plenty of time.”

Eleanor Dahl put a slender, beige-slippered foot between the door and the doorframe. “Can I come in just for a moment?”

Priscilla shrugged and stepped back, allowing her mother room to pass. Eleanor strode over to the closet and pulled the door open. “Have you decided what to wear?” she asked.

“Kind of,” Priscilla muttered, sitting down on the bed with an expression of grumpy carelessness.

“There isn’t a lot of choice,” observed her mother in clipped tones, flicking through the dresses on the rack. Stephanie had an entire dressing-room with several closets, full-length mirrors, and ceiling-high shoe racks. Priscilla was quite satisfied with a simple closet, the contents of which she always attempted to thin out.

“It won’t do,” said Eleanor. “You are supposed to wear it at the charity concert next week. And besides, it isn’t festive enough for a ball. Here,” she pulled out a floor-length spangled silver gown. “It will go nicely with the color of your eyes, dear. Do you have matching shoes?”

Priscilla wrinkled her nose as she looked at the dress. “It’s too chilly for this dress tonight.”

“Nonsense. I made sure the rooms are all well-heated. Ah, there are the shoes,” Eleanor emerged out of the closet triumphantly, holding a pair of silver slippers.

“I won’t wear them,” Priscilla declared, “they pinch.”

Her mother put down the shoes and glared at her. “Now you listen to me, young lady,” she said, raising one finger. “This is a big night for Stephanie, but that’s not all. Do I have to remind you that only two weeks are left until the elections? The press is going to be here. We are going to have plenty of coverage, and everything should look just right.”
Posted by Hannah Ross at 11:33 No comments: