Why you should write fanfiction

Fanfiction used to be a guilty pleasure for me. On the one hand, I was so engrossed I couldn't stop doing it; on the other hand, hadn't I better work on my original projects (of which there were usually several lined up)? Weren't my beloved fanfics a waste of time?

Well, looking back, I think the answer is no.

Writing fanfiction is beneficial for a budding author for several reason. The first is that anything that whets your appetite for creative writing is by necessity a good thing. I remember the fervor with which I delved into Severus Snape's character in my Harry Potter fanfiction, and the utter absorption in Unwilling Protector, which is based on my all-time favorite cartoon, The Gargoyles.

I do believe I emerged a better writer out of those fanfics, readier to tackle a novel of my own.

It's easier to write fanfiction because the setting and characters are already there, laid out for you - and all you need to add is plot and dialogues, which are both very enjoyable and very important to practice when you're just starting out, a lot easier than creating a world of your own, especially in fantasy.

Then there's the ready-made fan base awaiting you if you produce anything of better quality than tacky smut written by 13-year-old girls: I was astonished at the response that followed the tentative publishing of my very first Sansa/Tyrion fic, Make Me a Lion. There was a whole crowd of shippers looking for good fanfics and clamoring for just what I had unwittingly written. The people's positive feedback and varied comments really helped me to grow as a writer. Also, people who get to know you and follow you as a fanfic writer are a lot more likely to give your original work a chance.

Though the characters and setting of the original work belongs to the original author, the plots, dialogues, relationships, etc, belong to you - and nobody stops you from being inspired by them or even re-cycling them in your original work.

The important thing, of course, is to graduate to writing your own thing in time. Fanfiction is great as a playground and workshop for developing your writing skills, but it's only your original work that turns you into a real author.
Posted by Hannah Ross at 03:05 No comments:

Working on several projects at a time: pros and cons

Neither I, nor anyone else can tell you how or when to write, or how to organize your schedule. It's something each writer eventually works out on his or her own.

Perhaps you're one of those super-organized, aim-driven people who likes to start a project and finish it - one of those writers who will dedicate every spare moment to a single novel, until it's finished and polished. I confess I'm not one of those people. Though starting something, working on it and it alone, and finishing it may seem logical and efficient, it just doesn't work for me.

Whichever way you look at it, a novel is a long haul. Though with my 1,000 words a day schedule it's possible to turn out a first draft of a 100K-word novel in 5 months, usually novels take longer, up to several years - don't forget the editing process. And I really need that creative lift that comes from pure, unadulterated first-draft writing - you know, the kind when you don't worry about the turn of a sentence because you're so busy flying on the wings of inspiration.

So, what I usually (almost unconsciously) choose to do is the following: write the first draft of something, start editing/proofreading, and begin a new project at the same time. It does provide a distraction and slows down the editing of the first novel, but I find that if I try to stick to working on just one thing at a time, I'm a lot more likely to encounter writer's block.

Right now I have two such projects on the go: Wild Children, which is my very first sci-fi dystopia, is in the process of being edited. At the same time, I'm writing Stronger Than Blood, which is a Quest of the Messenger spin-off. Each one could perhaps be finished more quickly if I devoted a chunk of several weeks/months to working on it separately. But since I'm only human, and since I need to enjoy writing to keep doing it, I will stick to my way.

I do believe there are definite pros to working on several projects at a time, too. It enables you to step back a bit, get your mind busy with something else, then come back later and view your work with a more objective, critical eye - like staring down from the hilltop. I've had some really good ideas after stepping away from something, doing something else, then going back to the first thing.

But ultimately, again, I'm doing this the way I enjoy most, because writing is my primary creative outlet and I can't allow it to become a tedious chore.
Posted by Hannah Ross at 04:48 No comments:

Warriors of the Realm now on Amazon!

I have the pleasure to announce that Warriors of the Realm, the second book in the Quest of the Messenger saga, is now available for purchase on Amazon Kindle. 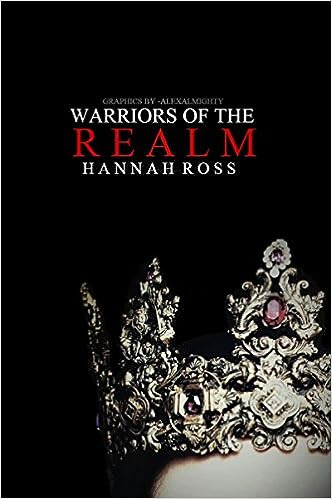 I thank my family, my friends and my readers for making this possible - and the awesome Alexalmighty from Wattpad for the cover design.
Posted by Hannah Ross at 13:05 No comments:

Email ThisBlogThis!Share to TwitterShare to FacebookShare to Pinterest
Labels: Warriors of the Realm

It has been a long time since I updated this blog, and I've certainly managed to accomplish a lot during this period. I finished proofreading and editing Warriors of the Realm, part 2 of the Quest of the Messenger saga, and Guardians of the Gates, the third and final part of the trilogy. I plan to make Warriors of the Realm available on Amazon soon, and I've already started serializing it on Wattpad.

So is the epic saga at its end? Yes, but to me, the journey to the world of Tilir will never end. I have begun working on a spin-off novel called Stronger Than Blood. It takes place right after the events depicted in Paths of the Shadow, and features Dankar Gindur, one of the most controversial heroes of the book. Its events do not happen in Tilir, but in a new and fascinating setting of a wild and beautiful land.

Here is an excerpt from Stronger Than Blood:


They reached a clearing, which was made by felling trees. Some of the trunks still lay there, discarded. Bright sunlight poured in from above, and for a moment Dankar was dazzled by the sun. He squinted. “The path ends here,” he remarked, none too pleased.

"It does,” said the scribe. “Raenir's men have never dared to go further into the Blue Forest... or else they were stopped by the savages.”

"So this is where our work begins,” said Dankar, leaping down lightly and rubbing his hands together. “We'll have a bite to eat, and then tether the horses and go on by foot – riding is impossible, of course, but the growth shouldn't be too dense for walking.”

The scribe looked uncomfortable. “We might... meet someone,” he said in a low voice.

"That was the point of our journey here, isn't that so?” Dankar observed briskly. “To meet the savages and parley with them, so that passage through the Blue Forest won't always carry a death risk. Do you know where the Xavans set their camps?”

"Those people are nomads, and the Blue Forest is vast,” said the scribe. “However, I do believe I can guess the general direction of - “

He never finished his phrase. His face had gone chalk white, and he opened and closed his mouth and opened it again, like a fish thrown upon the sand. Dankar whipped around.

A man stood in front of him. His skin was the color of bronze and covered in intricate patterns – whether paint or tattoos, it was hard to tell. His face was painted white and red and black, and framed by two curtains or straight, sleek black hair. He wore nothing but a loincloth and his feet were bare, and in his hands he held a slender spear which was pointing straight at Dankar's heart.

This was not the worst of it, though. The man was not alone. Quiet as shadows, silent as ghosts, more men like him were stepping out from among the trees, all tall and fit, bronze-skinned and black-haired. Some had rough smudges of black paint on their faces, other sported complicated designs which made them look like wild birds or beasts. There was at least a dozen of them, and their black eyes showed no mercy.

There was nothing to it. Dankar allowed his sword to fall to the ground and raised his arms in a gesture of surrender. It was not only that they were outnumbered – he had often fought against a greater number of enemies in battle – but they were caught completely by surprise. A minute ago, he could have sworn the forest around them was empty for many miles around. Now, he was at the mercy of savages who owned this land and did not feel like sharing it.

The man pointing his spear at Dankar growled something. It took two or three attempts to understand, but finally the scribe pitched in. “You come here, I think he says,” he suggested in a trembling voice. The Xavan man nodded. Dankar, remembering the purpose of his mission, tried to assume as pleasant and unperturbed an expression as possible.

"That is right,” he said in his best Sambearan. “We come here, to talk. Talk, do you understand? Not fight,” he glanced at his sword, which lay on the ground, and gave a small shake of the head.

The man looked unimpressed. He barked something else, and this time, Dankar understood.